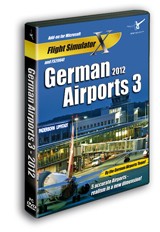 Built on high resolution aerial images the airports and their surroundings show an absolute realistic image of the real world. Another highlight is the use of the Dynamic Airport Enhancement Services. The services ensure dynamic traffic on the apron and surrounding roads and motorways creating a lively atmosphere.